by lobbystas on 12 October 2012
(Reuters) – The governor of the Bank of Greece was given a severance payment of 3.4 million euros when he left his former employer, a major bank that he now regulates, documents seen by Reuters show. 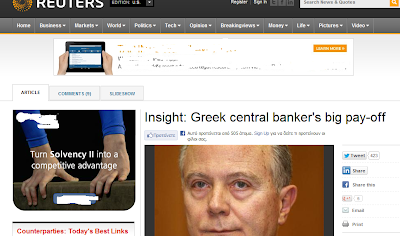 George Provopoulos was awarded the sum when he stepped down as vice-chairman of Piraeus Bank to become governor of Greece’s central bank and a member of the board of the European Central Bank in 2008. The scale of the pay-off, previously unknown to most Greeks, is likely to prove controversial, amounting to nearly 2.8 million euros ($3.6 million) after tax.
As governor of the central bank, Provopoulos, now 62, has played a key role in propping up Greece’s banking system, which has received billions of euros in liquidity from the ECB and is in line for up to 50 billion euros of new capital from the bailout provided by euro zone countries and the International Monetary Fund.
The Greek central bank has also faced criticism over the recent rescue of the country’s troubled state-run Agricultural Bank (ATE), which left-wing Greek MPs described as the “robbery of the century.” In that deal the authorities decided to place ATE’s non-performing loans into a ‘bad bank’ and hand the rest of ATE to Piraeus.
The Bank of Greece said Provopoulos faced no conflict of interest from his severance deal and had fully informed the authorities of the payment. When Reuters sent questions to Provopoulos, the Bank of Greece legal department responded: “In compliance with the applicable Greek law, Governor Provopoulos declared the severance payment to all pertinent tax and judicial authorities.”
In a letter to Reuters, Dr Vassilios Kotsovilis, the bank’s legal director, added: “The severance payment, having been agreed upon at an earlier time and under very different (pre-crisis) circumstances, was neither of an arbitrary nature nor of an extra-ordinary nature.”
Kotsovilis said details of the payment were reported in “the press and blogs of the period.” However, Reuters was unable to find mention of the payment despite extensive searches in both Greek and English.
Piraeus, which is suing Reuters over a previous report about the bank, said in a statement: “In view of legal proceedings… we consider it inappropriate to comment in any detail.”
It added: “It goes without saying that Piraeus Bank has always fully complied with the rules and regulations governing the Greek banking sector.”
BOARD APPROVAL
Provopoulos, a former chief executive at Emporiki Bank, Greece’s fifth largest bank, joined Piraeus, the fourth largest, on October 18, 2006. As a vice-chairman and managing director, he was entitled to a net salary of 580,000 euros, plus expenses and a