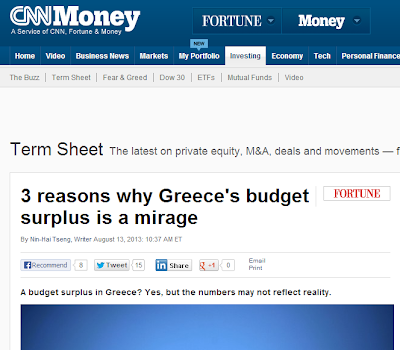 FORTUNE –For the past few years, we’ve heard little but bad economic news from Greece. This week, though, something unexpected has developed: The financially-strapped nation in the middle of Europe’s ongoing debt crisis has reported a budget surplus during the first seven months of this year following months of deep cuts to government spending. If this continues, it could post its first budget surplus in more than a decade for 2013.
The surplus reached 2.6 billion euros (or $3.5 billion), compared with a deficit of 3.1 billion euros a year earlier, the Greek Finance Ministry reported.
If it sounds too good to be true, it very well might be. Here are three reasons why:
It leaves a lot out:
Although spending cuts have helped create a budget surplus for Greece, there’s really no extra cash in the government’s coffers. Officials have reported what’s called a ‘primary surplus,’ which does not count what the financially troubled nation pays in interest for its monstrous debt.
MORE: Iceland is Europe’s ticking time bomb — again
Greece pays a discounted rate of interest as part of its bailout package, but even then the payments are still substantial because of the scale of its debt. It currently stands at 157% of GDP and is expected to rise to 171% by the end of this year, says David Beim, finance professor at Columbia University.
“The overall point is the Greek debt situation is completely unsustainable,” says Beim, adding that a quicker way for Greece to return to prosperity is for the country follow in the paths of Brazil and Mexico in the 1980s when the countries defaulted on their debts.
It has deepened the recession
Greece’s government might be spending much less, but it comes at huge costs to the economy, which has been shrinking for the past six years. During the second quarter, GDP contracted by 4.6% and many doubt whether the economy will be able to return to growth in 2014.
To be sure, a primary surplus would be a major — if somewhat technical — milestone for any country trying to prove it can manage its debt, says Jacob Kirkegaard, a senior fellow with the Peterson Institute for International Economics. It signals the country won’t have to take on new debt to pay for the old one; if the primary surplus rises substantially higher, the debt to GDP ratio would fall substantially.
MORE: Europe’s new Iron Lady
Greece isn’t out of its slump, but Kirkegaard thinks Greece’s surplus is nonetheless a “sign that the fiscal stabilization in Greece has almost been reached. In that sense this is good news for Athens,” he writes in an email.
That, however, depends how quickly the economy might grow months from now. For Greece, where the jobless rate reach a record 27.6% in May, the chances of a return to economic prosperity look pretty far away.
It delays the inevitable
If Greece’s budget isn’t as strong as the government may have us believe, why even say anything at all?
One reason is that the debt-troubled nation is looking to bolster its case for more debt relief from international creditors, as Eurozone officials have promised to help Greece with its debt if it promises to tighten its budgets and restructure its broken economy. Germany, however, has rejected the additional help.
If Greece’s budget surplus rises further, that could very well build a bigger case for a default. Some experts say it would be the best time to do so, since Greece would be getting rid of its debt at time when it has the economic cushion of a budget surplus.
But as Greece looks for more debt relief, officials are using the surplus to do anything but default.
ΠΑΡΟΜΟΙΑ ΑΡΘΡΑ
ΑΡΧΙΚΗ