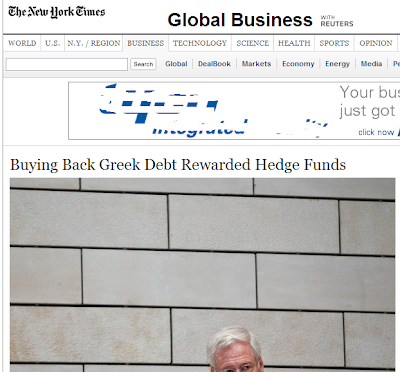 LONDON — Last month, the European Commission’s top economic official in Brussels, Olli Rehn, received an intriguing e-mail. Greece, under pressure from its European creditors, wanted to retire some of its debt by buying back its bonds at a deep discount to their face value. A senior executive at Deutsche Bank proposed that Europe take a tough negotiating stance toward private hedge funds that had bought Greek bonds. He urged officials to use a legal mechanism that would force the funds to sell at a lower price than they might voluntarily accept. The move was “perfectly legal” and would not “upset the markets,” the executive, Hakan Wohlin, argued. And by forcing private investors to sell low — for 28 to 30 cents on the euro, instead of the 34 to 35 cents many hedge funds were aiming for — Greece could achieve significant debt reduction at a reasonable cost. But in this latest showdown with private investors over Greece’s debt, Europe blinked first. With litigious hedge funds and global finance’s most powerful lobbying group warning of a market crisis, European officials rejected the hard-line approach. When the results were tallied on Dec. 12, Greece had reached its target of buying back enough bonds at a discount to retire 21 billion euros, or about $27 billion, of its debt. The bigger winners, though, were hedge funds, which pocketed higher profits than many had expected, in yet another Greek bailout financed by European taxpayers. To some experts, this latest chapter in the long-running Greek drama is another reminder of how private investors have outmaneuvered European officials at various stages of the debt crisis. And they caution that each time it happens, future debt workouts in the euro zone will become even more costly. “I just don’t understand why they did this,” said Mitu Gulati, a sovereign debt specialist at Duke University School of Law, who argues that Europe could have saved up to 2 billion euros. “This would have been an easy transaction to do, and still the hedge funds would have come out with a hefty profit.” Opportunistic hedge funds have profited handsomely from the euro zone crisis, be it by speculating in Greek bonds or by buying up the senior debt of failed Spanish banks. They have successfully bet that Europe, ever fearful of Greek-style contagion, will prefer taxpayer-financed bailouts to forcing concessions from the private sector. In Greece this year, so-called vulture funds like Dart Management were paid back in full after refusing to take the losses that most other private bondholders grudgingly accepted as part of the 100 billion euro Greek bailout that Athens and Europe agreed to in March.
The big winners this time, according to bankers and investors, were American and European hedge funds like Greylock Capital, Fir Tree, Brevan Howard and Third Point, all of which snapped up Greek debt last summer as warnings grew that Greece might leave the euro and default on its debt. Many have booked gains of 100 percent or higher.
They largely have the financial lobby to thank — in particular the Institute of International Finance, which is based in Washington and represents the interests of more than 450 banks, hedge funds and other financial institutions around the world. The institute played on fears in Brussels, Rome and Madrid that a hard-line approach to the hedge funds would create another round of market chaos.
The warning was blunt: If Athens set off legal

mechanisms in the bond contracts known as collective action clauses, forcing bondholders to accept lower prices, investors would stop buying the bonds of struggling European countries. That would be bad news for Spain and Italy — to say nothing of Portugal and Ireland when they return to global bond markets in 2013.
Countering this pro-hedge-fund argument was a small circle of bankers, lawyers and policy advocates, the most prominent of whom was Mr. Wohlin, the Deutsche Bank executive who sent the e-mail. Another was Adam Lerrick, a former investment banker now affiliated with the American Enterprise Institute.
They argued that collective action clauses have a legitimate function: to help near-bankrupt countries reach debt restructuring agreements with a majority of their bondholders, with a minimum of legal fuss from investors holding out for a better deal. All euro zone countries that issue debt next year will have such clauses in their bond contracts, and proponents say there is scant evidence that they cause market turmoil.
“If you use these features within the rules, they should not cause any disruption,” said Jeromin Zettelmeyer, a sovereign debt specialist at the European Bank for Reconstruction and Development.
Multimedia
Interactive Feature
Tracking Europe’s Debt Crisis
Mr. Wohlin, who was the lead financial adviser to Greece in the buyback, said he was not authorized to discuss communications with clients. That includes his e-mail to Mr. Rehn, the European Commission’s senior economic official, parts of which were reviewed by The New York Times.
He said that while he strongly believed that using collective action clauses in a buyback could achieve maximum debt reduction, such an effort would have required a financial commitment that Europe was not willing to make.
“The price Greece paid was a very fair one,” Mr. Wohlin said. “And kudos should go to the official sector, which executed a deal that was fair for the taxpayer and did not upset the market.”
For collective action clauses to kick in, two-thirds of investors must agree to the offer price, and European officials say there was no certainty that this would have happened. A buyback was only going to work if enough investors holding Greek bonds could be persuaded to sell — and in the early summer, when it looked as if a Greek default and departure from the euro zone might be imminent, that prospect seemed ludicrous.
But when Greek bonds trading on the open market hit a low of 12 to 13 cents on the euro over the summer, some investors started to ignore the doomsaying on Greece and scoop up the country’s debt on the cheap.
Among those investors was one of Citigroup’s in-house hedge funds, which piled into Greece even as the bank’s lead economist, Willem H. Buiter, was estimating a 90 percent probability of Greece leaving the euro.
By the fall, Greek bonds had become one of Europe’s most popular high-risk bets. But as demand sent the price soaring to 25 cents on the euro, some money managers began to worry about how they might leave their positions.
At the same time, it was becoming clear to Greece’s official European creditors that the country would miss debt-reduction targets set in its March bailout program. A quick solution was needed.
But there was a problem. Seventy-five percent of Greece’s debt was now owed to European governments, the International Monetary Fund and the European Central Bank — none of which would accept a loss.
So attention turned to the 62 billion euros of debt held by the private sector.
The conditions for a buyback seemed propitious: the debt was trading at a 75 percent discount, there was a pool of holders ready to sell and, most crucially, the bonds were blessed with collective action clauses expertly tailored by Lee C. Buchheit of Cleary Gottlieb, the foremost legal authority on how to reel recalcitrant bond investors into a restructuring deal.
In the face of stiff opposition, Germany embraced the concept. In his e-mail to Mr. Rehn, Mr. Wohlin of Deutsche Bank argued that there was nothing to fear in using collective action clauses.
On the contrary, he wrote, such clauses are used in most debt restructuring exercises, and investors “would expect Greece to use it.”
To some degree, Mr. Wohlin was right. As the hedge funds’ bond stakes grew, their lawyers prepared arguments to counter the strategy.
Also swinging into action was Charles H. Dallara, the departing managing director of the Institute of International Finance, the investors’ lobbying group. Mr. Dallara flew to Athens in mid-November to tell the government that invoking the clauses would be disastrous for Greece and the euro zone. He also made calls to, as he put it, “the highest levels in Europe.”
His warnings resonated.
There would be no use of collective action clauses, and bankers were told to fashion a voluntary plan. As word seeped out that the exchange would be a friendly one, hedge funds pressed their advantage.
“I won’t even answer the phone for anything less than 35 cents,” one large holder said in late November.
On Dec. 3, the terms of the buyback were announced.
To the market’s pleasant surprise, instead of the average price of 28 cents agreed to earlier, the offer was made at an average price of around 33 cents.
One week later, the deal was done.
ΠΑΡΟΜΟΙΑ ΑΡΘΡΑ
ΑΡΧΙΚΗ